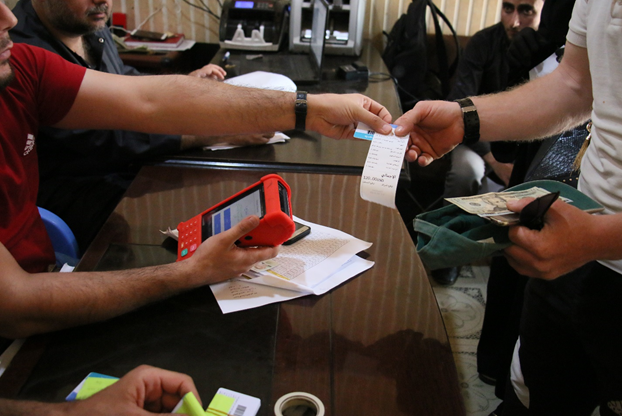 Manahel Chemonics Education Program in Syria has been piloting an e-voucher system to support its work assisting communities affected by ongoing conflict. This has not only saved time and promoted accountability but has also resulted in a number of unanticipated benefits that are affording dignity to teachers in the most difficult circumstances. This case study gives an overview of the tool and the benefits it has brought to the program.

Fighting in Syria has caused millions of people to flee their homes and affect all humanitarian services. A huge need in all sectors has been reported since 2011. Manahel project funded by DFID start their work in Syria since 2014 to support education sector by running stipends program to sustain children access to school, by providing a cash support to teachers.

Manahel has been working with Finance services agency to pilot a new e-voucher technology, ‘GeniusVoucher’, which enables conflict-affected teachers to access stipends easily.

Between April 2019 and June 2019, Chemonics international Manahel project successfully set up and implemented its first pilot, cross-border e-transfer project in Syria. A total 406 teachers in Salqeen, Harem and idlib city, Idlib province, received e-vouchers through PIN-protected e-vouchers which were distributed, managed and reported through the GeniusVoucher cash payment system.

The GeniusVoucher system was able to track and record every e-voucher transaction in real time, which meant if Manahel wanted, they could evaluate the impact and progress of the program remotely back in Turkey on a regular, even daily basis.

The GeniusVoucher system worked well and had overwhelmingly positive feedback from staff on its functionality and improvements to internal processes, particularly that the reporting and payment system was highly efficient.

Anticipated benefits of the new approach

We were excited to find out how the system would make a difference in our cash interventions. beneficiary distribution time cut in half, beneficiary received their stipends and other vendor-related data is updated in real time which allow Gaziantep office to monitor the process directly.

Each teacher receives a plastic card that has a name and financial code on it, much like a debit card. For security purposes, there was no Chemonics/Manahel branding/visibility on the e-cards, other than GeniusVoucher. Cards contained beneficiary name, serial number, instructions on how to use the card in Arabic and a helpline number, plus barcode and NFC chip. These cards act as e-vouchers and can be read-only by terminals which are given to selected Hawala offices. The Hawala office handle a money to teacher based on unsigned payroll prepared by Manahel. Manahel Gaziantep office prepared the list of teachers and their stipends and upload it directly to a portal. In some cases, Manahel field staff are authorized to deduct money from stipends based on teacher timesheet, and the remaining amount considered as a cash on hand.

Being able to access the system in real time enabled Manahel to gain better levels of transparency and accountability that are often compromised when organization/NGO have no direct access to project locations and staff.

Manahel staff eagerly anticipated the new technology and saw it as a way of addressing many of the logistical challenges associated with stipends distributions. One of the program staff said:

‘We were excited to find out how the system would make a difference in our cash interventions. beneficiary distribution time cut in half, beneficiary received their stipends and other vendor-related data is updated in real time which allow Gaziantep office to monitor the process directly.’

Safety is another major concern in any cash intervention: given what are often difficult security situations, there are clear advantages in being able to distribute and track cash remotely. With GeniusVoucher, the cash credits are topped up remotely with the click of a button. Beneficiaries are instantly notified that they can claim cash through the voucher system

Some vendors had feared that the electronic terminal would be a ‘burden’ as they would have to spend more time on transactions while they figured out the new system. In reality, their fears proved unfounded. In fact, the new approach has eased the administrative burden on vendors, as purchases are updated in real time and receipts are stored electronically. This greatly reduces the risk of errors, and also means vendors can be repaid much faster than was previously the case

For Manahel team responsible for project management, the e-transfer technology has made monitoring distributions much easier and less time-consuming. Every cash transaction is recorded and can be tracked immediately through the dashboard. Information is tallied automatically and presented in a visual manner that helps inform program decisions. For example, staff can see at a glance the cash-transfer agent’s number of transactions per day. In a similar project without this technology, just gathering this data would require numerous field visits to the cash-transfer agent, followed by many hours sorting through receipts and tallying the information.

‘You saved our dignity’

As described above, the digitalized system met and even exceeded the team’s expectations. What had not been anticipated, however, was the overwhelmingly positive feedback from the community on the new approach. First, it was felt that the e-vouchers afforded people with dignity in a way that a regular cash distribution could not. This came across very clearly in the interview conducted with beneficiaries at the end of the project. As one teacher put it:

‘You did not know this, but you actually saved our dignity. We do not have to look for our names on papers and remember our number to provide to the Hawala office, just giving the card all my information and stipends appears on his device and give me an invoice confirming my receipt. It’s just like the way we used to deal with our salaries before 2010.’

The use of a cash-based approach (vouchers) was dignifying for the recipients and received with extremely high levels of beneficiary satisfaction. It also provides provided a tighter level of reporting and data protection than a paper-based system, and once set up was efficient and easy to use. Using the system allowed Manahel to conduct remote cash programming through a pilot, whilst still maintaining control and visibility of expenditures from a distance. There were no security concerns or incidents in relation to the stipends program itself, despite the overall security situation remaining volatile throughout the period

© 2016 – 2020 GeniusTags, LTD. All rights reserved. Proudly made for humintarin sectores